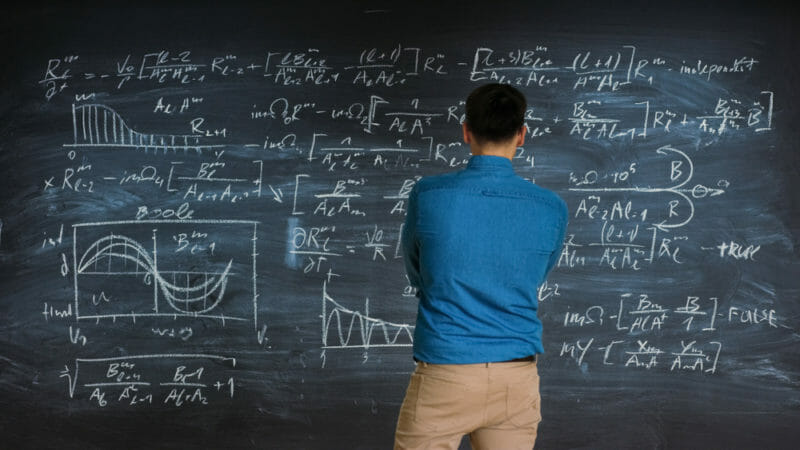 If you’ve got equations on the brain, there could be a lucrative career in your future.

Let me preface this by saying that I hate math. I hated it in school and I hate it now. I think the pocket calculator is one of the greatest inventions conceived by mankind, and any teacher who still teaches long division is dumb. However, I am well aware that not everyone shares this mindset. In fact, a close friend of mine is a bona-fide math maniac. He keeps a whiteboard next to his desk, and when he’s bored, he writes out long, complicated problems, then solves them for fun. It’s strange to me, but through this friend of mine, I’ve learned there is an entire community of math-meisters out there. If you have an affinity for numbers and calculation, you’ve already got a viable tool for career advancement on your belt.

The most obvious career paths for someone good with numbers is a financial one, like an accountant, stock broker, or financial analyst. Speaking from experience, people who aren’t good at math want the opinions of those who are when it comes to matters of personal finance, and they’ll pay top dollar for it. Of course, regular math and financial math are slightly different beasts, so you’ll likely need some higher education for that, but if you’ve got the numerical chops, it shouldn’t be too hard.

If you’re more interested in scientific pursuits, you could find viable careers in engineering, math study, or even astronomy. Engineering in particular is a great career path, as it’s almost always in demand in just about every modern industry. Engineers and mathematicians are also in demand for scientific research, so it could be a great chance to make your mark on history if you’re into that. Though if you prefer something a little more down-to-Earth, you could always be a math teacher, though don’t expect to make as much money for that.

Math is frequently viewed through a perspective similar to my own, in that it’s a tedious, annoying process. If you’re someone who is not only skilled in that process but enjoys it, people will throw money at you to do it for them.