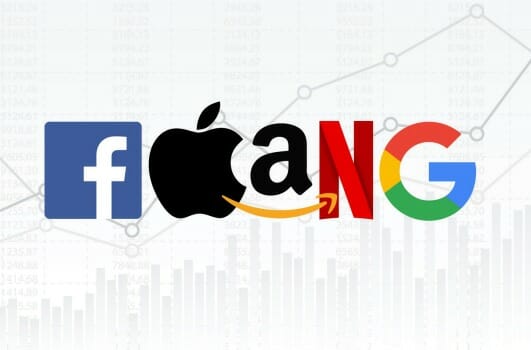 Facebook, Amazon, Apple, Netflix, and Google (Alphabet, which is Google’s parent company), make up what is known as ‘FAANG’. Coined by CNBC Mad Money host Jim Cramer, the acronym is a term created to identify to five most well-performing tech stocks on the market. All five of these companies are household names, and can appear as Goliath to the competition’s David. Well, it seems like all of these companies are currently being trounced by their own respective David, as each member of FAANG, has fallen into a bear market.

A bear market can be loosely defined as a period marked with dropping securities prices, low investor confidence, and a general encouragement to sell of your stock before you lose (too much) money. More specifically, especially in the case of FAANG, it is when a company’s stock drops 20% or more from their annual high price point. And every member of FAANG currently fits within this parameter. Facebook and Netflix have seen the biggest hits, with their stocks dropping 39.5% and 35.6% respectively. Amazon is in the middle, dropping 25.4% and Apple and Alphabet come in fourth and fifth place, dropping 20.5% and 20.3%.

Facebook has seen more than a few controversies this year, that have no doubt played a huge role in the massive drop in their stock prices. Most notably, the Facebook-Cambridge Analytica data hijacking scandal. Back in July, Facebook lost $119 billion dollars worth of its’ value in a single day; the single biggest one-day loss in the history of the U.S. stock market.

Despite dominating the TV streaming service market, Netflix has taken a massive hit and is frankly the most perplexing case of the bunch. Out of the five, reception for the company seems to be highest, and yet it sports the second worse drop of the five FAANG members. Some have suggested that just being linked to the other FAANG members is the cause of Netflix’s plummeting stock prices.

Back in October, Amazon hit the 1 trillion dollar market cap milestone, and yet have been going down steadily since then. Like Netflix, getting to the bottom of this decline is a bit tricky. The final two FAANG members, Apple and Google/Alphabet, are more understandable. Apple products across the board have been performing poorly, consumers have far less interest in Apple products than they used to have, and Apple prices are simply too expensive. Google suffered a big hit in October when it was revealed that there was a glitch in their Google+ social network software that exposed the personal information of users to software developers. In the wake of the Facebook-Cambridge Analytica disaster, Google couldn’t have made a bigger blunder.

The five members of FAANG are important figures in the stock market, and their slumps are having a serious effect on the NASDAQ. The NASDAQ 100 has dropped 3.26% period, which is the lowest close in 6 months. As worry about the FAANG companies grows more and more, one cannot help but wonder if that worry will seep into the general market and cause more companies to fall into the clutches of the bear.